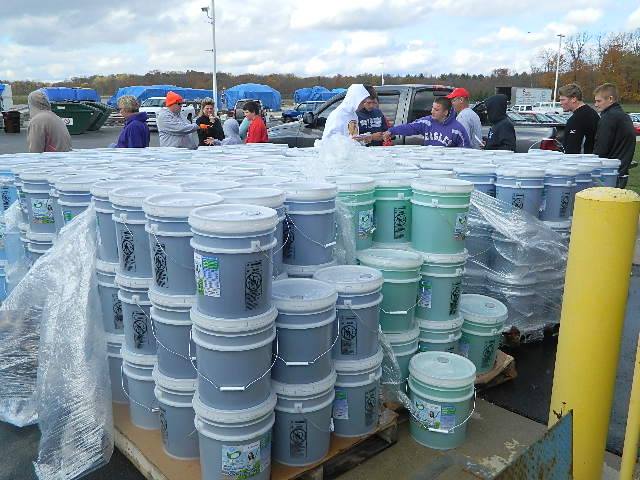 Laundry detergent Fundraising in the News

When you work for a non-profit, it’s important to stay up to date on the latest news, events and trends in your industry. This week, we’ll be posting our first Fundraiser’s Update. We’ll feature pertinent news and success stories about fundraising campaigns you may have missed that will inspire you.

Muslim Community Raises $100,000 in One Day for Jewish Cemetery Repair

In mid-February, tragedy hit the St. Louis Jewish cemetery, Chesed Shel Emeth. Vandals toppled and damaged the gravestones on 180 graves. The Jewish community was stunned and horrified. Even though police are investigating and checking surveillance videos, no suspects have been arrested yet.

Using crowdfunding resource LaunchGood.com, Tarek El-Messidi of Celebrate Mercy and Linda Sarsour of MPower Change launched a campaign to help right this wrong for the Jewish Community. It was an amazing success, raising $20,000 in the first three hours. As of February 26th, the campaign has raised over $129,000 to re-set and repair the damaged grave stones. Any money left over, according to campaign leaders, will go to the growing security needs of the Jewish community.

“People in a cemetery should be able to rest in peace,” said Sarsour on MSNBC Wednesday during a talk with Andrea Mitchell. “I expected nothing less from my community, who has always been a generous community.”

This fundraising campaign is affecting change even beyond the repairs themselves. In fact, in a conversation with NBC News, El-Messidi said that more than 100 messages have been received. Many of those messages are from American Jews touched by the support of the Muslim Community.

Campaign Raises More Than $1 Million for Victims of Kansas Shooting

Last week’s shooting death of an Indian man has impacted people around the world – especially as it is alleged to have been a crime based solely the man’s ethnicity. A fundraising campaign has raised more than $650,000 for his wife and family. Srinivas Kuchibhotla was 32-years-old when he was struck down while out with his colleague, Alok Reddy Madasani. Madasani sustained treatable injuries; however, when onlooker Ian Grillot attempted to intervene, he was critically injured, and has since been receiving treatment. A man by the name of Adam Wade Purinton was later arrested for the crime in Missouri.

While the survivors heal and a wife buries her husband, the international community has come together to donate to help with burial costs and the survivors’ needs. GoFundMe was the platform of choice for these campaigns. As of February 26th, Ian Grillot’s campaign has raised more than $379,000; one account for the deceased had raised $619,000 by that time. The exact amount raised in total by the victims is hard to total, as several accounts have been started in their honor. One thing is certain, though – the GoFundMe campaigns are showing the victims and their families that people do care, while easing the financial burdens of burial and medical treatment.

With these and other, similar fundraising stories making the rounds, it’s comforting to know that when tragedy strikes, people both in our country and worldwide are banding together to show their support. Most interesting to non-profits is the fact that crowdfunding sites seem to be the main way through which this support is shown. The way that people give has changed, but the willingness of people to support others clearly has not.